Digital Advertising Hits $189 Billion In 2021, Global Forecasts Predict 5% Yearly Growth Through 2027
U.S. digital advertising revenue of $189 billion in 2021 was the biggest increase since 2006, including audio advertising with a leading 57.9 percent growth rate, and newly-released report data predicts that the audio ad market will see a compound annual growth rate (CAGR) of 5.07 percent that will continue on through 2027. MediaPost

Sound investments: just how effective is audio branding?
The number of brands rolling out sonic identities in 2021 grew by 22 percent, with new research showing a five percent increase in perceived value for brands that have a recognizable sonic identity, as more brands have become aware of the power of audio branding to tap into areas of the brain not reached through non-audio content. The Drum

Google Launches Dedicated YouTube Podcasts Site
YouTube has continued to refine ongoing testing of a new section of its platform dedicated entirely to podcast audio content, including a new podcast tab on YouTube’s page for exploring content, as the Google-owned social platform seeks to provide podcasters its own alternative to Spotify, Apple Podcasts, and its own Google Play, YouTube recently announced. MediaPost

Facebook is losing its grip as a ‘Top 10’ app as BeReal and TikTok grow
Facebook’s mobile app has increasingly experienced periods during which it hasn’t been among the top ten apps downloaded in the U.S., as rising entrants on the list including BeReal and TikTok have created greater competition for the Meta-owned firm’s app, which plummeted momentarily to the number 44 spot earlier this year, according to app store data. TechCrunch

Google Adds New Viewer Attention Metrics for Display and Video 360 Campaigns
Google has rolled out a slew of new and updated data measurement features relating to viewer attention, which have been made available within its Google Display & Video 360 ad tools for managing programmatic and other campaigns across multiple channels, Google recently announced. Social Media Today

Thought Leadership Being Used to Connect with Various Stakeholders
76 percent of business leaders use thought leadership to connect with customers or clients, with 75 percent for connecting to internal employees, 68 percent to make connections with general consumers, and 64 percent to reach prospects — four of several statistics of interest to B2B marketers contained in newly-released though leadership survey data. MarketingCharts

ON THE LIGHTER SIDE: 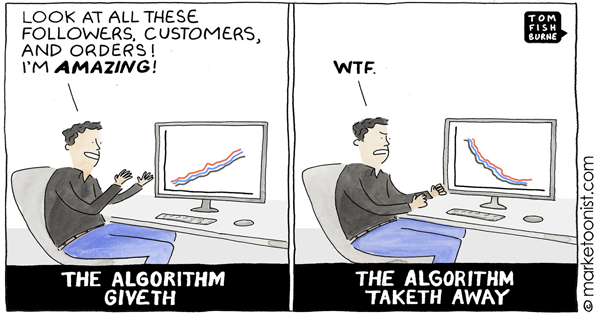 TOPRANK MARKETING & CLIENTS IN THE NEWS:

Have you found your own B2B marketing news item this week that we haven’t yet mentioned? If so, please don’t hesitate to let us know in the comments below.

Thank you for taking the time to join us for this week’s TopRank Marketing B2B marketing news, and we hope that you’ll return next Friday for another array of the most up-to-date and pertinent B2B and digital marketing industry news. In the meantime, you can follow us on our LinkedIn page, or at @toprank on Twitter for even more timely daily news. How to Complete a Brand Audit (Infographic) | Brafton Why Blog Post Outlines Are the Secret to Successful Blogging |...

How to Create a SaaS Content Marketing Strategy That Converts –...

7 Curated Content Examples to Help You Master The Curation Game...