Instagram chief Adam Mosseri flagged the coming change a few weeks back, and now, Instagram has made it official, with the merging of its long-form IGTV offering into a more general ‘Instagram Video’ format, meaning the end of separate IGTV branding – and ideally, a more streamlined Instagram experience.

“Starting today, we’re combining IGTV and feed videos into one format – Instagram Video. We’re also introducing a new Video tab on your profile, where this combined video format will live, to make it easier for people to discover new video content.”

As you can see here, the new video tab, signified by a play button icon, will now display all of your uploaded videos in one place. The merging of IGTV and general Instagram video will also provide new playback functionality, with viewers able to tap anywhere on the video to enter full-screen mode, while users will also be able to keep scrolling “to discover new video content from creators that may interest them”.

In addition, Instagram’s also adding new trimming tools and filters for all uploaded video clips, as well as location tagging in videos (previously not available for IGTV). 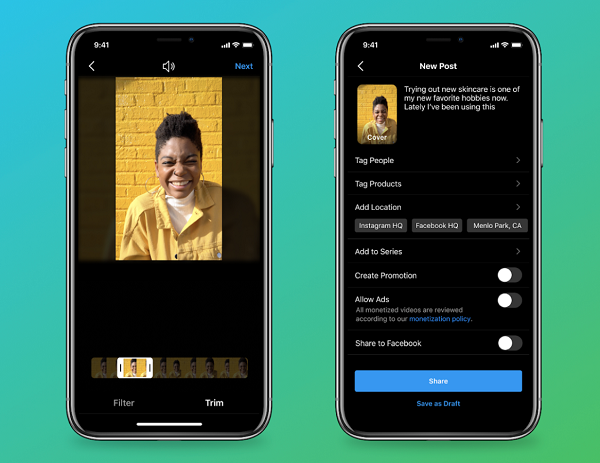 The actual posting process for video clips will be the same, but in-feed previews are changing:

“Video previews in feed will now be 60 seconds long, unless the video is eligible for ads – in which case, the preview will still be 15 seconds.”

That means users will be able to view more of your content without having to tap through, which could help generate more interest, and will have impacts for those looking to maximize engagement with their in-stream previews.

And for those who are looking to make the most of their Instagram video content, there are also some updates to video metrics, with feed post insights and video insights being merged into one combined metric, both for businesses and creators.

I’m not sure that will be an overly beneficial change, particularly for those looking to optimize their specific content elements, but it will give you a broader view of your overall stats, as opposed to separate data for IGTV performance.

And finally, Instagram’s also changing the name of its video ads:

“With Instagram Video, IGTV Ads are now called Instagram In-Stream video ads. Eligible creators can still monetize their long-form content, and brands can reach audiences engaging with long-form video. For businesses interested in boosting their videos to reach more people, videos must be no longer than 60 seconds in length.”

Again, these are important tweaks to the process for content creators, and it will change best practice approaches in many aspects. Reels will not be impacted by the change.

As noted, Instagram chief Adam Mosseri recently pointed to the platform’s plan to streamline its video offerings, as part of a broader effort to simplify the app, which has become increasingly complicated with the addition of Stories, IGTV, Reels, and various other new elements.

Instagram used to be a basic image-sharing app, and it’s amazing to consider its evolution in this respect, which has clearly helped it maximize user growth, but has also, potentially, made its app a little too bloated, which could be turning some users away.

Facebook noted the same with Messenger, with too many additions making it just too much to deal with, which prompted Facebook to scale the app back to minimize disruptions.

It almost seems like that’s part of Facebook’s growth DNA – build out every app with every possible feature addition that you can think of, in alignment with usage trends, till it becomes too much, then scale things back.

The question, then, is whether Facebook has waited too long to simplify the platform, or has the ongoing bloat already turned some users away, likely to TikTok instead?

We’ll find out, with the new, simplified video format now being rolled out to all users.