If you have tried to work with Google Analytics 4, you probably noticed that there are different features available for analysis (or building of retargeting audiences). I am talking about segments, audiences, and comparisons.

There might be a slight overlap between some features but in general, they are designed to serve different purposes. In this blog post, I wanted to address their differences so that you would better understand them.

To make sure that you really understand these 3 features/topics, I highly recommend checking out their dedicated blog posts too:

Differences: Segments vs Audiences vs Comparisons

I have split differences into several groups:

Segments can be used only in Explorations, like Free Form or Funnels.

Comparisons cannot be used in explorations directly. But if you click the Explore button in the comparison’s sidebar navigation (read the previous chapter), those comparisons will be turned into segments in that particular exploration. Read this to learn more.

Segments cannot be used in standard reports. They are limited only to explorations. Segments are not shared between separate explorations.

Audiences can be used as a dimension in comparisons, thus they can be used in standard reports. But keep in mind that audiences are not retroactive. They will start collecting data only from the moment they were created.

Comparisons can be used in standard reports (and that is their primary purpose).

Segments cannot be used in Google Ads. They are used primarily for analysis in the Explore section. But while you create a segment, you can choose to build an audience based on a segment. Read this blog post to learn more.

Audiences are primarily built to be used in Google Ads as remarketing audiences. Read more.

Comparisons cannot be used directly in Google Ads, but if you want to go the ridiculous way, you can click Explore button in the Edit Comparison sidebar > then click 3 dots next to the segment (in exploration) that was build based on that comparison > then click Build Audience in the Segment builder and done. You have just converted comparison to segment and then built an audience. It was unnecessary but, well, that was possible

Segments are retroactive. If you create a segment, it will show past data based on your conditions.

Audiences are not retroactive. They will start accumulating data only after you create them. So it is a good practice to create as many audiences as you deem useful as soon as possible. Learn more about audiences. 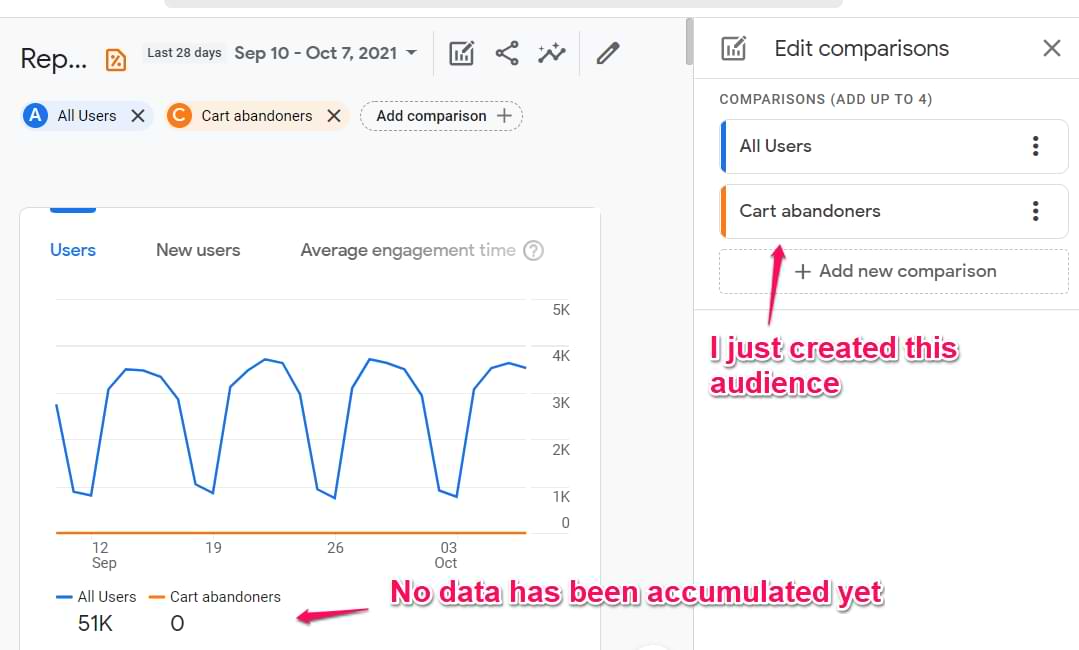 There are also other small differences that I decided to list as honorable mentions:

There might be some smaller differences too but these ones (that I have covered in this quick blog post) are the most significant ones.

The key takeaway here is that Google Analytics 4 comparisons are designed to be used for quick analysis/comparisons in standard reports. But if you want to dig deeper, you will have to use explorations instead together with segments. Audiences are best for ad targeting.

If you want to see a full picture of these 3 features in GA4, read the following blog posts too: segments in GA4, audiences in GA4, comparisons in GA4. Google, NBCUniversal duking it out to be Netflix adtech provider