Anyone who has had to rewrite title tags for whole websites will commiserate with Google’s motivation for rewriting title tags: too many websites use title tags that are too short, too long, meaningless, irrelevant, bizarre, or just plain missing! No doubt Google saw distinctly better usability metrics when they split-tested this change in live search results.

If this change is better overall for users, Google must be rewriting our title tags fairly often, right? Descriptive snippets do contribute to better search results after all, so how often is Google doing this? We conducted some research very similar to our previous posts about meta description rewrite rate and featured snippet length to find out.

This figure includes simple truncation and Google’s more advanced methods. Basically, if the string in the snippet title didn’t match the title tag of the page, we counted it as a rewrite.

That 63% figure isn’t uniform, and it differs according to device and title tag length. Actually, if you write your title tags a certain way, you can expect Google to write them 39% of the time across devices.

Google has been adjusting how our title tags display in our SERP snippets for years now, but the change Google made in August 2021 was huge. Not only is Google now writing the way title tags display more often, but its changes are also more drastic than before.

Previously, Google only had a few tricks up its sleeve to generate usable snippet titles, such as:

Now, Google is synthesizing more aspects of a page to create snippet titles. Google can use anchor text of a link pointing to a page, category or breadcrumb names, image ALT attribute text, and more. Seer Interactive has a good summary of where snippet title text can come from.

Google is also cutting more text out of title tags. Boilerplate text, brand names, text in brackets and parentheses, and keyword stuffing are all common features Google will remove from a title tag.

The net effect of this change is that brands have even less control over how their pages appear in search engines. Beyond the basic annoyance of search engines ignoring the effort we put into writing relevant, descriptive title tags, Google will sometimes display goofy and confusing snippet titles, as Lily Ray has observed in her blog post on the topic.

This development is a huge bummer for SEOs, so let’s take a look into some factors that could contribute to high rewrite rates.

Once again, our SEO Fellow and hero/developer Matthew Henry provided the data analysis and API wrangling. We used a list of over 32,000 non-brand keywords that have provided our clients traffic, and Matthew pulled ranking URLs and snippet titles from STAT Search Analytics.

Matthew took the first 100 basic organic results from those keyword rankings, and scraped them for their title tags. If we couldn’t retrieve a page or the title tag was missing, we ignored the URL. We didn’t render JavaScript or try to trick firewalls blocking bots. If a <title> tag was available in returned HTML, we took it.

For rewrites that were truncations, we checked to see if the snippet title was a substring of the title tag. This is a simple check and won’t cover cases where Google truncates the title tag and adds the brand back on to the end. That’s a difficult case to detect, and we didn’t include it.

We tried to look at the most “basic” organic results possible by filtering out stuff like featured snippets. We aimed for the “classic ten blue links” in our dataset.

Like we said at the top, 63% of the snippet titles we checked didn’t match the title tag of the source page.

Our results corroborate the 61% figure Cyrus Shepard found in his research, but they don’t agree with the 33.4% figure Ahrefs found. I don’t think we had the same finding as Ahrefs because their methodology was significantly different in that they checked to see if there was more than a five-character difference between snippet and title tag.

The truncation rate is low on both devices. Since we only checked the simple case, that could mean Google is really good at figuring out what the brand part of a URL should be and sticking it on the end after truncating.

We expected to see very similar rewrite rates for desktop and mobile because Google said their new title rewriting algorithm was based on the page and not the query, but there was an 8% difference between devices. Perhaps which snippet title they use is somewhat dependent on the device?

One of the most common recommendations I give clients regarding title tag length is to make sure they are not so long that Google will cut off the end of the tag, and not so short that Google will use some other text. Here we see that title tags between 40 and 65 characters are the most likely to be used as-is in the snippet. 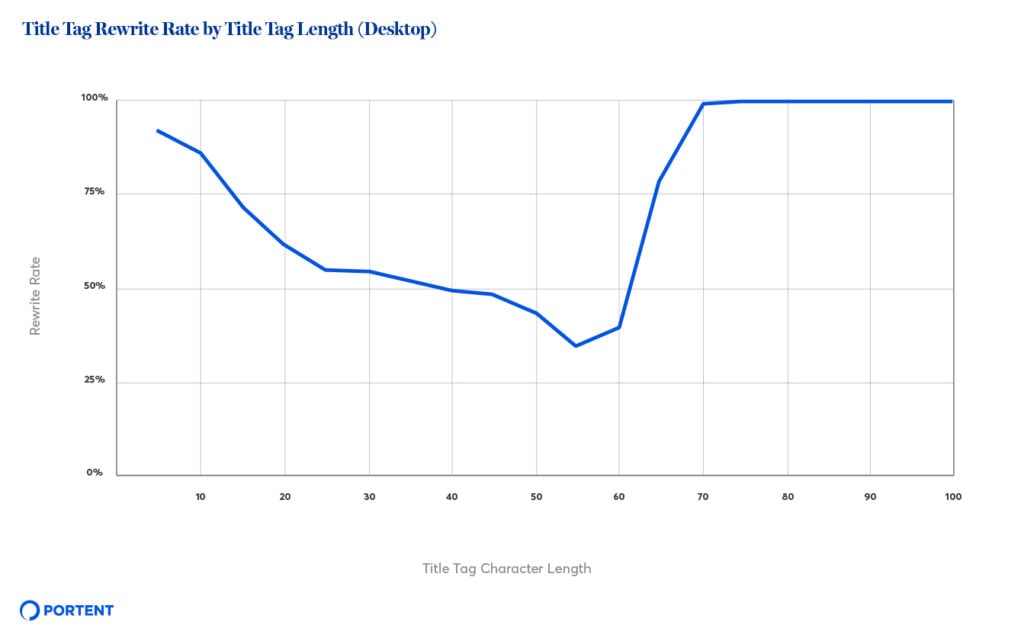 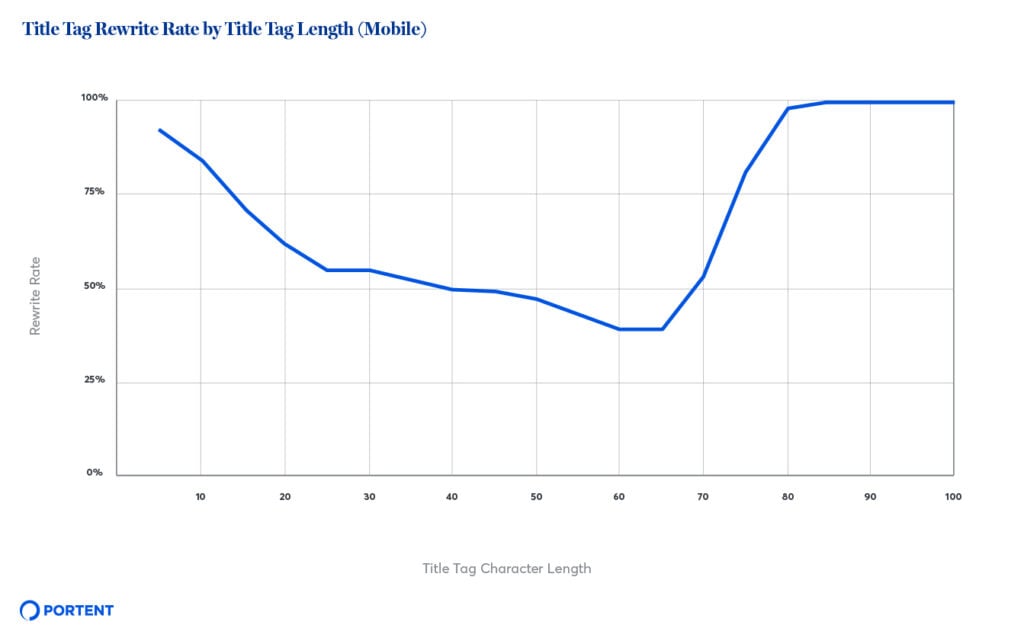 The display limit for the snippet title is governed by pixel width, but barely anyone communicates that way to writers, clients, and stakeholders. Pixel width is like a secret language SEOs use, and character count is a much simpler lingua franca for everyone else.

So in terms of character count, how many hand-written characters can we expect to fit into a snippet title before Google rewrites it? 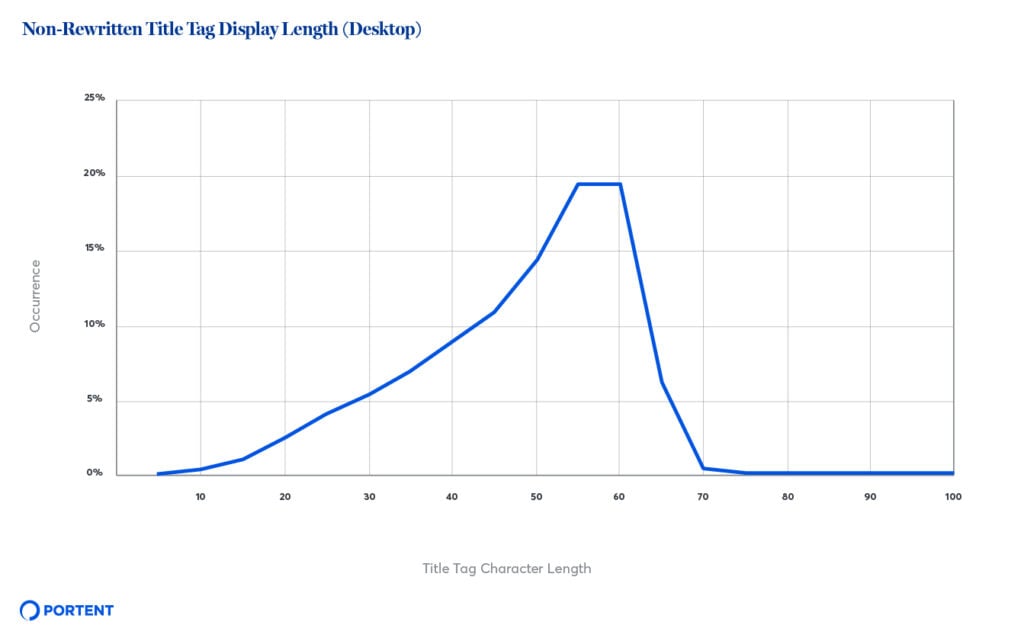 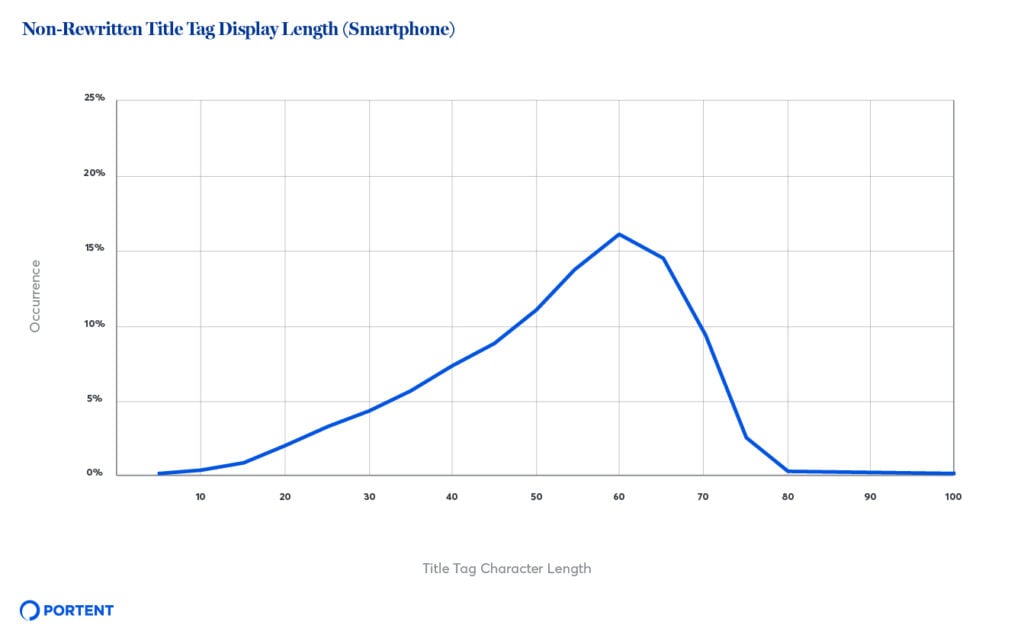 Our title tags will almost never appear in Google’s desktop search results if they are 70 characters more, but they will appear at a decent rate in mobile results. I think this explains why the rewrite and truncation rates are higher on desktop than on mobile; Google simply has less room to show full title tags on desktop.

So how long should we try to make our title tags? If we want to make sure they are unlikely to be rewritten in both desktop and mobile results, then 60 characters should be our maximum. If we’re only concerned with mobile traffic, then we could go as high as 65 or 70 characters before Google starts rewriting and cutting off our titles.

Does Google rewrite tags more often for some positions than others? Google says their rewriting algorithm is based on the page and quality of the title, so position shouldn’t matter much. However, there is a weird trend at positions 1-3 where they tend to be rewritten less often by a few percentage points. 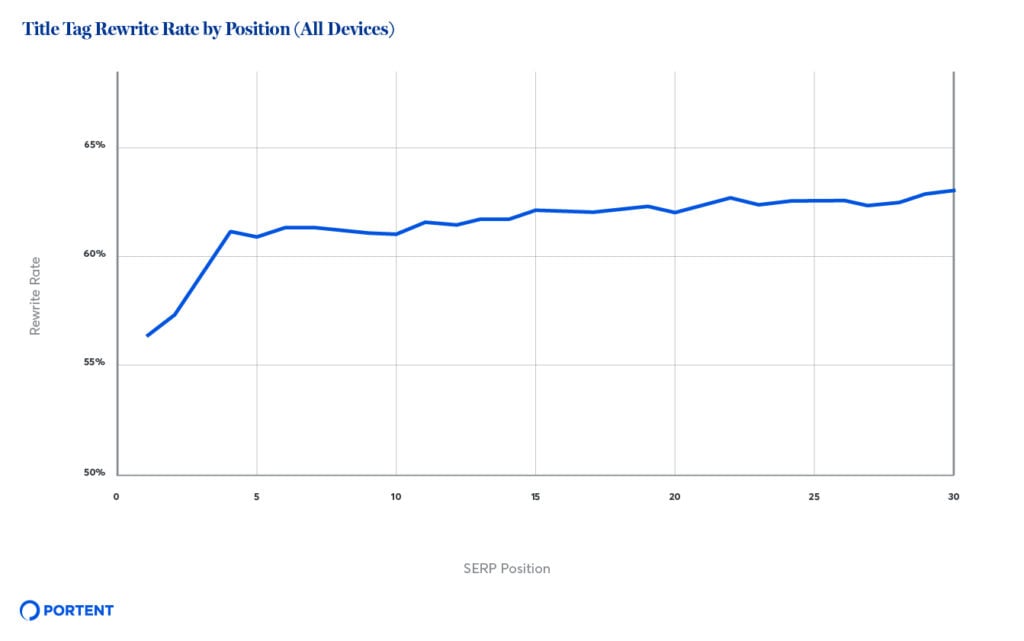 In the first few pages of Google results, the overall rewrite rate is less than the average 63% and trends upward to 64% on page 10. This is probably due to SEOs putting effort into writing good title tags, and the pages with SEO attention are more likely to rank in the first few pages. Search results after page three are so low-relevance they might as well be noise in a lot of cases.

This doesn’t explain positions 1-3, though. Overall, the first basic organic result will have its title tag rewritten 56% of the time. Are those the pages with a lot of time for SEOs to work on them? Or does Google find that their search results are better if they use title tags as-is a little more often?

Another possibility is that STAT doesn’t categorize some unusual search results as such, and they are throwing off the data. We tried to get the most “basic” organic results in our dataset, so featured snippets and other result types aren’t included. It’s something we’re going to look into deeper.

Rewrite rate doesn’t vary much by keyword search volume, but it does show a trend that could be explained by SEO activity. 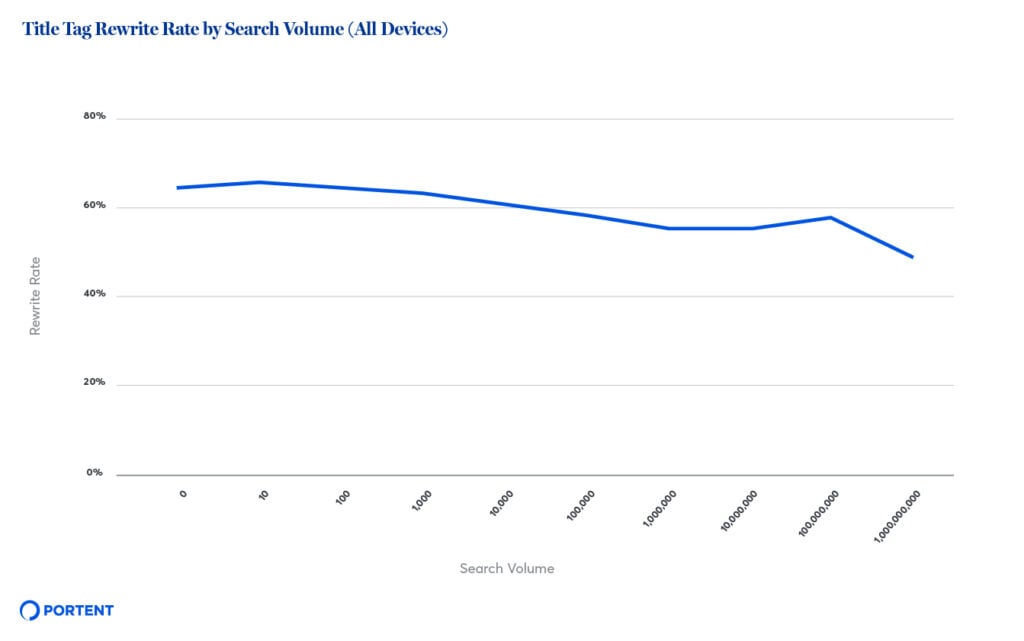 The nature of SEO inclines many of us to spend more time thinking about and working toward ranking on high-volume queries. Could a lower rewrite rate for high-volume keywords be another result of SEO activity? Or could it be due to the types of pages that tend to rank for these keywords?

Long-tail keywords should have more blog posts, Q&A pages, and overall less conversion-oriented content ranking for them, and those pages do tend to have longer title tags. So maybe this chart is a little column A and a little column B.

The lowest rewrite rates occur between 50 and 65 characters, but I don’t think that is because Google has a special preference for titles that long. Instead, I think Google is reacting to the quality of title tags that we’ve been publishing. Google has to work with the title tags we give it, and SEOs have been recommending that we write titles that are 50-65 characters for over a decade.

If the industry instead said the sweet spot is 40 characters, and we spent a decade repeating that number, then the best rewrite rate we could hope for would be a lot closer to that number. Though on the other hand, we didn’t use 40 characters because it’s not the approximate displayable amount Google gives us. Dialectical, isn’t it?

Finally, based on how we’ve trained Google to display our title tags and how much space they give us, I have to conclude that we should go with the flow to get the most control over how our search snippets display.

With this new data and what I’ve seen over the years, my basic recommendation to get Google to use our title tags is as follows:

This is just the first post in a short series on how Google rewrites our title tags. In the next installment, we’ll look more at what content Google uses to assemble a replacement snippet title and more factors that could influence rewrite rate. We’ll also explore when it’s a good idea to ignore the standard advice for writing title tags (hint, Google still uses the title tag for keyword matching, not the text they use in the snippet). What is Google Discover & How Do You Optimize For It?...