It’s Friday, so that means it’s time for the latest episode of ‘What’s Happening in the Elon Musk/Twitter takeover?’

And if you’re a Twitter employee, this week’s news is not great.

“Musk told prospective investors in his deal to buy the company that he planned to get rid of nearly 75 percent of Twitter’s 7,500 workers, whittling the company down to a skeleton staff of just over 2,000.”

Musk’s planned staff cuts have been well-documented – back in May, as part of a leaked overview that Musk had sent to potential investors, it was reported that Musk was looking to cut around 1,000 staff on day one, before eventually adding back over 2,700 employees by 2025, in line with platform growth.

Nobody knows how, exactly, Musk plans to stimulate that growth, and I’m not convinced Elon does either, but his perspective, at present, seems to be that Twitter is bloated, costly and underachieving.

Musk actually summarized such himself, when he was questioned about the Twitter deal in Tesla’s third quarter earnings call earlier in the week:

“I think it’s [a massive asset] that’s sort of languished for a long time, but has an incredible potential.”

Musk also noted that he and his fellow investors are ‘obviously overpaying’ for the app. But even so, he’s excited for what comes next:

“The long-term potential for Twitter, in my view, is an order of magnitude greater than its current value.”

That sure sounds like someone who’s ready to pay up and take over at the app – though the deal is still not technically finalized at the time of writing.

Either way, significant concerns still linger around Musk’s grand Twitter plan – especially when he’s tweeting out memes like this:

Musk later deleted the tweet – and of course, as various people who’ve dealt with Musk have noted, his Twitter persona and actual real-life approach are very different. But still.

He also posted, then deleted, this: 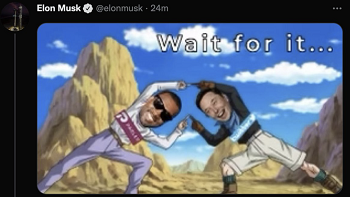 Kanye – or ‘Ye’ as he now prefers – moved to acquire free speech social network Parler this week, and the fact that Elon’s even joking about merging these apps seems to not be a great sign for Twitter’s future, especially if he’s going to, you know, get rid of all the staff that would theoretically take care of the moderation concerns that are likely to emerge as a result of any related shift in approach.

Really, it’s not possible to separate fact from fiction in the Elon Musk/Twitter stakes, because we have no way of knowing what Musk’s plans are for the app, outside of the vague notes and pointers that he’s offered along the way.

Though again, this seems likely to be the most significant point of contention, and does appear to align with Musk’s actual approach.

By “free speech”, I simply mean that which matches the law.

I am against censorship that goes far beyond the law.

If people want less free speech, they will ask government to pass laws to that effect.

Therefore, going beyond the law is contrary to the will of the people.

We’ll have to wait and see, but cutting 75% of staff, while simultaneously opening up the ‘free speech’ gates? That could see things get very messy, very fast in the Twitter-sphere.

On another front, Musk has reassured ‘3-time bee sting survivor’ Dave Portnoy that he does indeed intend to tackle the platform’s bot issues.

He also shared this random thought, apropos of nothing:

I will not let you down, no matter what it takes

That’s not part of a longer thread, or a reply that I’ve chosen not to embed. It was just a single tweet, a note to the world, maybe.

Well, it seems like staff cuts are inevitable, and the impacts of that will be impossible to predict – though I don’t think that Musk knows for sure what the actual number of cuts he’s going to make will be as yet.

Maybe the suggestion of 75% cuts is a means to give those who are already considering leaving the company a little push, in order to avoid future payouts – or maybe Elon is indeed going to go department-by-department on the first day, laying people off as he goes.

And I think that’s it for the Musk/Twitter update this week. Oh, also, Musk’s Twitter purchase could be under National Security review, which could still derail the whole thing. Yeah, that too.

The chaos rolls on. LinkedIn Provides Tips on How to Increase Your Company Page Following

LinkedIn Tests New Option to Switch Off Political Posts in Your...

How to Get Verified on Instagram in 6 Simple Steps