After launching an initial test of Professional Profiles for brands back in April, Twitter is now making a move towards the next stage of its business push, with a new ‘Shop Module’ now also being tested with a selection of brands in the US.

“The Shop Module is a dedicated space at the top of a profile where businesses can showcase their products. When people visit a profile with the Shop Module enabled, they can scroll through the carousel of products and tap through on a single product to learn more and purchase – seamlessly in an in-app browser, without having to leave Twitter.”

With the broader growth of eCommerce, virtually all social platforms are now looking into how they can incorporate shopping elements, in order to keep users on-platform for longer, and maximize revenue opportunities. As such, it’s no surprise to see Twitter exploring the same, which, as noted, is another element in its expanding push to provide more tools for business users

Back in March, Twitter ran a survey with some users in which it asked for feedback about potential business features that could eventually be incorporated into its Professional Profiles. Among those was this exact Shop Module, along with various other display elements.

It seems likely that, eventually, all of these display options will be made available to business users as Twitter expands this push. The question then is, will these options be available for free to brands, or will businesses have to pay a monthly fee, like Twitter Blue, in order to access these add-on tools?

Twitter’s been experimenting with various forms of add-ons that users would have to pay to access. Twitter Blue, of course, is the highest-profile example thus far, with users paying a monthly fee for additional tweet features, including ‘Undo Send’ and Reader Mode. But Twitter’s also testing updates to its tweet management platform TweetDeck, which may also evolve into similar subscription options for professional users.

Even Twitter’s Professional Profiles may become a paid option, as the platform looks for more ways to generate revenue, as part of its broader push to double its revenue by 2023.

Given this, it does seem likely that this new product display could become a paid tool. It’s early days yet, with only a small number of brands getting access. But based on Twitter’s rising monetization focus, this seems like the way that such elements will be headed.

Would brands pay to access additional professional features? Would you pay to add a Shop display on your Twitter profile?

Many businesses likely will, and as such, it seems like a prime opportunity for Twitter to boost its revenue options – so before you get too carried away thinking of the potential here, you should also consider that it will likely come at a cost.

But that’s the next stage, and Twitter hasn’t specifically said that it will charge for such features as yet. Twitter has noted, however, that it’s establishing a new Merchant Advisory Board, which will include a range of brands that have established themselves on the platform, whom it will refer to for future business tool developments.

“With their partnership, we hope to more easily address the needs of businesses of any size or vertical in our product innovation.”

The next stage, then, could be shopping options within Tweets, which it’s also experimenting with. 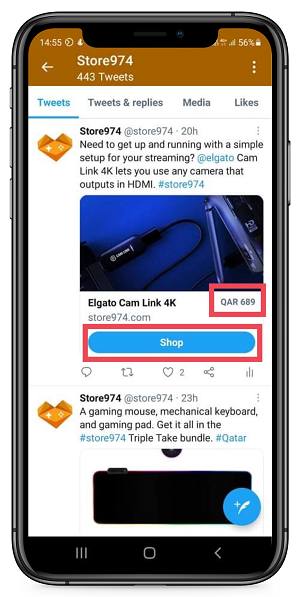 Twitter has said that its eCommerce elements will take time to develop, but clearly, there is significant opportunity on this front, and within Twitter’s broader growth plans, it could become a major key.

We’re only in the early stages right now, but you can expect a lot more on this front in the coming months.

Twitter says that it’s initially testing the Shop module ‘with a handful of brands in the United States’ before making any decision on a broader roll-out. We’ll keep you updated on any progress. Multiple-set TV households provide an array of access and choice for...